>I recently had a client return from attending a big family event remark, “I felt really different from doing all this body stuff. I actually felt three dimensional in the presence of my family!” While this might seem like a simple thing to say, I knew exactly what she meant. I also knew how much work had gone into making that happen. It’s one of the things I love about working with embodiment– that we can make a clear, felt difference in one’s experience.

Like many, she experienced being with her family of origin a challenge. She felt that she had to quash herself to fit in and that there was no space for her in their presence. Her sibs and parents expressed no interest in her life, and she had learned to make herself flat and two dimensional, like a piece of paper or a cardboard cutout when attending family events. Consequently she couldn’t feel grounded nor very present when at family events, and did she feel she had a sense of presence, of substance as a person.

All this was mirrored in how she lived in her body in her life… which was hardly at all. This was one of the things we had been working on. She lived mostly in her head, in her thinking, and though she had a sense of her body from athletics, it was of her muscular, surface layer and she only could feel herself clearly when moving, i.e. using her muscular-self. She couldn’t feel her insides at all, and her legs were not very present in her awareness. Given this, when she was stressed she flew from her head where she lived most of the time, up and out altogether.

So, we had been working through Nervous System Energy Work (NSEW) to open up the pathways into her body through her nervous system, and to use the resulting increased sensing ability to learn to ground herself. This meant to literally go downwards when stressed rather than up and out. By going downwards with her awareness and energy she could: a) counter the rising energy of anxiety (see The Toothpaste Squeeze); b) fill out into her internal body space so she could feel dimensional and substantial; and c) feel her legs and the ground under her as support. I’ve tried to illustrate this process in the picture below by way of the good graces of Google Labs Google Body (http://www.googlelabs.com) and a little creative editing on my part. 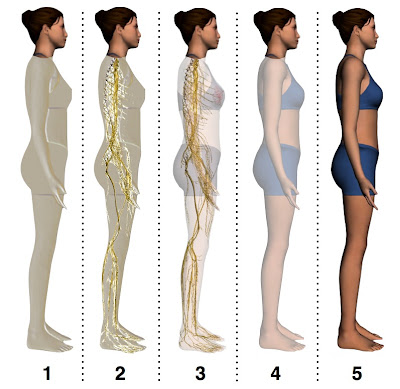 In picture #1 we see our starting point, not much contact with her body below the neck. Picture #2 illustrates how the work with NSEW opened a flow of energy and increased sensation through the major nerve pathways, from her head downwards. In #3 we can see the progression as this work allowed her to sense her body from the inside. She no longer had what I called “a virtual body,” but an actual, felt-sense of her body. Number 4 is meant to illustrate her growing sense of her body as substance- muscle, bone, organs, container and contents both. Picture #5 is perhaps an idealized, fully embodied self, which she is at least when at her best: present, in contact with her feelings, sensing her connection to the ground and supports, three-dimensional.

All this is well and good in the therapy room and in the normal stresses of life, but it is not until we face the challenge of a situation that otherwise unhinges us that we see what really has been truly acquired. A family event was certainly the acid test for her, as that was where she had felt unhinged more often than not.

Although I’ve done this a long time, even I found myself responding to her initial statement, and not sarcastically mind you, “Wow! You mean this stuff really works?”

No events to show

Your cart is empty